There are few sights as striking as a Magnolia tree in full bloom. The large pink and white blooms contrast vividly with the bare leafless branches in precocious magnolias creating a spectacular although short-lived display. Precocious magnolias are those that bloom before the leaves emerge. I just had to take a walk down the road to capture the one blooming close to our house.

My 3 year old daughter called it the ‘lovely cycling tree’ because she stopped to admire it when cycling by on her equally pink bicycle. Although the garden is small the magnolia tree is a perfect fit and creates a focal point that brings passers-by to a halt by its stunning blooms. The flowers start out in velvety cased buds – like a gift-wrapped surprise and burst forth in spring announcing the start to the season in March. 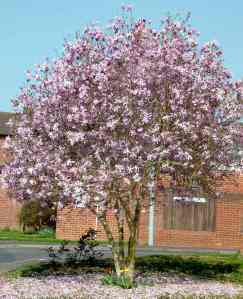 Based on my reading I think the tree pictured is Magnolia x loebneri ‘Leonard Messel’. This type of Magnolia was first cultivated at Colonel Messel’s Nymans Garden in Sussex in the early 1950s and is said to be a chance cross between Magnolia kobus and Magnolia stellata Rosea.

The Nymans in Sussex was formerly the home of the Messel family and is renowned for its beautiful gardens. Leonard Messel created the magnificent gardens during the 20s and 30s, but he was also responsible for raising and training the 4th Reserve Battalion of the The Buffs (the Royal East Kent Regiment) during the First World War as Lieutenant Colonel Leonard Messel. The gardens are now managed by the National Trust.

The colourful scented magnolia flowers attract insect pollinators such as beetles and its beauty belies its ancient heritage. The fossilized remains of magnolias have been found dating to 100 million years ago.

The Magnolia tree was named in honour of French botanist Pierre Magnol and was chosen in 1703 by another French botanist Charles Plumier who saw his first magnolia trees on the Caribbean island of Martinique.  Pierre Magnol was the first to introduce the concept of plant families using a natural classification system describing  groups of plants based on common features. This concept was published in his book Prodromus historiae generalis plantarum, in quo familiae plantarum per tabulas disponuntur (1689) 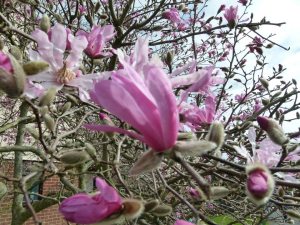 Magnolia trees can feature blossoms in white, pink, red, purple, or yellow and they include both evergreen and deciduous types.  Now that its mid-April most of the trees have shed their beautiful flowers showering the ground below them with pale pink tepals and their leaves have started to emerge.

My magnolia tree is going mad!

on branches bare a month ago

this blush, first flush of Spring,

on limbs unburdened by their weight

not buds, but birds, burgeoning:

there’s no mistaking them:

of becoming and of being.

Much more than surprise

is a kind of offering.

in the shelter of each other

they cluster in their peace.

Nothing startles them or stains

their gentle rush to radiance.

Only vagrant winds soft and rough

and restlessness so tender

and my need clear: keep watch

and catch the joy before it flies.

Yet all is hover and hold,

and the only flight is fall:

and soon above on branches stirring,

noiseless as before appear new wings

But oh! that pink-white loveliness

before the green, that bloom of birds,

that brief but shared delirium.

The world and I need such madness. 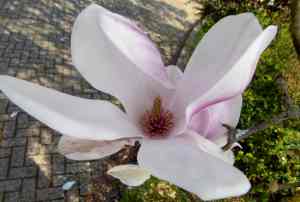